I’ve been a soccer (the real football) fan since I learned how to walk. I played the sport for decades and, of course, I developed a serious interest in following various teams. When they win, I’m in a celebratory mood. The defeats are part of life, and I don’t like my team’s losing, but that’s life, so I accept it. Sports are supposed to be for fun and excitement even if a particular game’s outcome isn’t what I/we want. Yet, many fans forget this. Why?

It seems that humans have had an innate sense of tribalism. “We versus the others.” It probably made sense when competing for scarce resources to exclude the others. As humans congregated in smaller groups, they developed cultures that reinforced the notion of “us” and how special this group was compared to all others.

Destruction and chaos left behind before the PAO v. OSFP this weekend.

As conditions changed and smaller groups joined together, there was a transfer of allegiance from the smaller unit—say, the clan or the tribe—to something larger, like the nation state. Tribalism, however, has survived even in the advanced societies. Humans have the need to belong to something special, but if everybody is in it, then how special can you be? Right?
That’s why people form exclusive associations, and become even rabid fans of sports teams. Those who are so engrossed in such, they may lose perspective of the larger picture. Soon, their own identity is largely dependent on the special group (like a sports team), and their perception of self-worth rise or falls as that of their group. This can get out of control as we’ve seen, sadly, too often.

Greek Soccer as a Reflection of Greek Society

On a beautiful Saturday afternoon, I sat down to watch the PAO v. OSFP game, hoping I’d see a clash of titans—the two most popular teams in Greece. Of course I wanted to see this “fight.” I wanted to see my team beat their rivals but within the bounds of sportsmanship. I did not want to witness a violent free-for-all destructive mayhem of barbaric proportions.

Unfortunately, no one was truly surprised that this could have happened. In a corrupt system—and not only within the soccer league—nothing really works as it’s supposed to. There is a widespread crisis of legitimacy.
Greece is in a state of a legitimacy crisis. Most institutions are not considered legitimate today in Greece. This is very, very serious.

Legitimacy exists when there’s consensus about the fundamentals of a society—the reasons this society should exist, what it does, how it does it, and where it’s headed. Institutions can be organizations, like the church, the military, the sports leagues, the justice system, the press, etc. Institutions can also be common practices, like democracy, marriage, free expression, etc. How many of these, or other institutions, can you, dear reader, identify as being strong and legitimate in the country?

Legitimacy doesn’t mean you have to like or even participate in an institution, but you accept its existence. For example, you may not be a sports fan, or a member of a church, but you recognize that such are meaningful in a given society.

Legitimacy is absolutely essential in the stability of a system or a country, because the outcome is accepted. I may not like the outcome of, say, the elections, or the result of a game when my team loses, but if I believe it’s the outcome of a legitimate process, I accept it. If not, then there’s a crisis. Most Greeks today challenge the outcomes of a variety of processes on legitimacy grounds. They have lost confidence in the system and their institutions.

Change Should Happen from Within

But, what I find most amazing is that many people don’t want to acknowledge that unless they themselves don’t change things won’t improve. In the sports forums these days, there are endless discussions of who’s responsible for what happened before the scheduled PAO v. OSFP game. Most arguments center around who did what first and who’s done the worst in the past. This, in my opinion, is not productive.

In the heat of the fighting (verbal and physical) reason is lost as it is the greater perspective. We should all ask, what do we want to achieve? Start with the answer first and figure out a way to make it happen, collectively, reasonably, like mature adults. Egos and primal instincts—like revenge, and “us v. the others”—should be kept in check if good progress is to take place.

Unless the people aren’t capable of finding a solution themselves… This is a challenge and history as a guide doesn’t bode well for Greece. For all the talk about national independence and the conspiracy about foreigners wanting to keep Greeks down, history shows that, since at least 1821, in-fighting has gotten the better off this nation. Should I dare ask, does Greece need a Big Brother, or an outsider in order to straighten its own affairs? For it seems to me, that national independence begins with people who can work together for a common cause, respecting and supporting each other.

The road to a better tomorrow starts with people who can see reality, identify the real problems, and make corrections instead of repeating the same mistakes and behavior of the past that got them into the present mess. 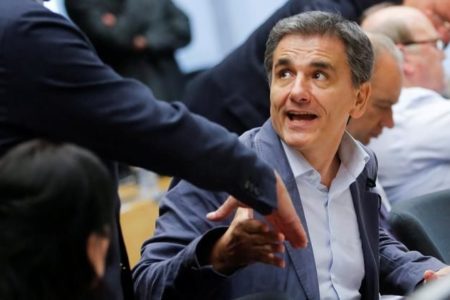 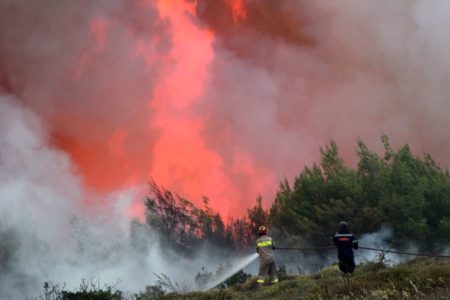 Illustrators, designers and cartoonists in Thessaloniki for “Comic Con 3” festival