During the first nine months of 2016, a clear trend regarding the rise of urban violence and extremism has been observed in Greece and, in particular, in Athens. Protests over economic woes, illegal migration, and football hooliganism, coupled with the spread of political extremists and criminal gangs largely account for this phenomenon.

Following the present analysis is a chronological set of important incidents of Greek urban violence from January through September 2016.

All available information indicates that most of these security events are associated with a “hard nucleus” of 100 or so anarchists from several member groups (with lots of subgroups, there are about 80 anarchist groups in Athens alone).

These ideologically-driven individuals can count on additional support from roughly 300 migrant activist elements, at least 50% of those foreigners. An emerging trend is the use of teenage Syrians who are placed in various sit-ins in the center of Athens, mainly in the anarchist-friendly Exarcheia neighborhood. It is not known if they are taken advantage of by the anarchist factions (for their own purposes) or if they are simply ideologically motivated.

Historically, the anarchists have tended to attack whichever target is ‘easy.’ This brings them publicity, keeping them visible in the media (and social media), and helps construct the the image that they control parts of the city. It is also highly probable that at least some collaborate with criminals for joint profit.

The below chronology indicates that the PASOK political party was targeted. However, this is simply because it is an ‘easy target,’ with locations in Exarcheia- not because of its party policies.

The data correlates with a perceived trend that today’s anarchists (including those associated with the pro-migrant cause) are not interested, or possibly not capable of, carrying out targeted attacks against high-profile individuals who are guilty in their minds of hypocrisy or acting against their values. Thus it seems the ‘golden age’ of Greek urban combat (as with long-disbanded groups like ELA and 17 November, which attacked Greek politicians, businessmen and foreign officials) is over.

Football hooliganism is another chronic problem found in many countries. In Greece today, supporters of the major teams are engaged in a bitter fight – especially Olympiacos, Panathinaikos, AEK and Thessaloniki’s PAOK – over a scandal regarding the fixing of football matches that was examined by prosecutors in April 2015.

This issue has been discussed in media. According to reports, the Greek National Intelligence Service even lent its wiretapping services to investigating the case from 2011 onwards. Top football bosses and other related persons were suspected of running a scheme to control Greek football in order to make illegal profits. The investigation has angered rival bases and also resulted in opaque bombings and threats against whistleblowers. The simmering unrest has also resulted in a beefed-up police presence at matches.

Official figures indicate that public demonstrations in 2016 have increased by 100% compared to the previous year. In the first six months of the year alone, there were 4,220 demonstrations across the country, most of them concerning the country’s economic state or migration.

In addition, vehicle theft increased by 9%, and house burglaries by 3%. The bulk of the crime rate increase is most notable in Athens, and less so in other part of the country.

At the same time, police forces have increased stop-and-search operations and have enacted a series of nationwide operations, resulting in more than 100 arrests daily for drug offences in a few cases. Despite a series of crackdowns, the drug flow is steady in the country for all sorts of narcotics- a fact which implies that the trade is becoming fragmented and new “criminal blood” has entered this sector.

There are also being witnessed numerous arrests of Syrian refugees who have already become dealers of mostly cannabis, not only inside the refugee camps but across urban spaces. In most cases known to police, they are being recruited by older generation of Arabic immigrants already living in the country.

All indicators at hand suggest an emerging trend of a “crime wave” that will affect Athens in the winter of 2016-2017. The last time that a similar phenomenon took place was in 2011-2012, during a period of intense political infighting and economic destabilization.

This period ahead will inevitably include masses of immigrants/refugees located in camps who are gradually becoming involved in criminal activities, and may even be inclined towards religious radicalization. The convergence of interests between anarchists and migrant activists, as discussed by Balkanalysis.com last December, also continues and in some recent cases of fires and destruction (mostly concerning migrant camps in the islands) there is a strong likelihood that leftist forces supported these actions.

This is traditionally considered a vacation period, in which activists suspend attacks in favor of the beach. Nonetheless, urban violence continued, albeit at a 30% decrease. A notable event (though not in Athens) was the occupation of Aristotle University in Thessaloniki by No Border prop-migrant activists and anarchists (including a large foreign contingent) in July.

These other European anarchists were generally more violent, though Greek anarchists led the way with symbolic occupations of low-risk targets (like the office of the ruling leftist Syriza party). Their purpose was to criticize the government’s new refugee camp system set up with EU guidance, following the closure of the ‘wild’ Eidomeni border camp. Activists also sought to challenge police at the Evros border fence with Turkey, but their efforts were minor and inconclusive.

The action was renewed September 2016, with the end of holiday season and return to universities. Since then, the main targets of attack have been public transport, shops, governmental buildings and especially police stations- the usual targets. A police chief was also attacked in September, while there have also been various threatening proclamations against a variety of people, posted online. 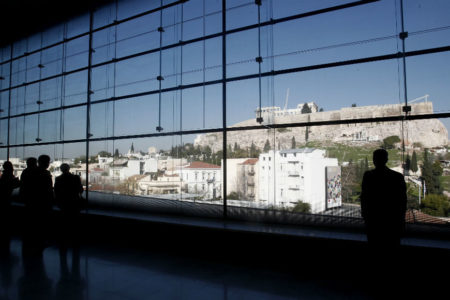