A U.S. congressman says Russian hackers’ malware found in a computer at a supplier of electricity in the state of Vermont is further evidence of “rampant Russian hacking,” but President-elect Donald Trump says such charges should be investigated carefully.

“They will hack everywhere, even Vermont, in pursuit of opportunities to disrupt our country,” Welch said. His statement came as criticism of Russian cyberspying escalated and support broadened for sanctions President Barack Obama has imposed on Moscow.

From Florida, where he has been spending the Christmas-New Year holidays, Trump spoke briefly to reporters late Saturday to confirm that he will be meeting with leaders of the U.S. intelligence community in the coming days on the Russian computer-hacking issue.

“Well, I just want them to be sure, because it’s a pretty serious charge,” Trump said as he entered the grand ballroom of his Mar-a-Lago club with his wife, Melania, for a gala New Year’s Eve dinner. “…I know a lot about hacking, and hacking is a very hard thing to prove.”

Trump has been skeptical about the extent of Russian involvement in the past year’s computer intrusions, including those aimed at the Democratic Party and the campaign organization of his opponent in the U.S. presidential election, former Secretary of State Hillary Clinton.

Trump said he wants to be certain that American intelligence experts’ analysis of Russian hacking activity is correct.

He told reporters he wants to avoid a situation similar to what he said were badly mistaken intelligence estimates before the U.S. invasion of Iraq in 2003 — specifically, about whether or how many “weapons of mass destruction” were controlled by the late Iraqi dictator Saddam Hussein.

Following the disclosure of Russian malware on a computer in Vermont, officials in the states of New York, Rhode Island, Massachusetts and Connecticut say they are more closely monitoring computer networks belonging to state governments and to public utilities.

No other breaches have yet been identified publicly.

Vermont Governor Peter Shumlin said Americans should, in his words, “be both alarmed and outraged that one of the world’s leading thugs, (Russian President) Vladimir Putin, has been attempting to hack our electric grid.”

When and why malware added

Officials said Friday it was not clear when the Russian code entered the utility’s computer, but that an investigation hopes to determine the timing and the objectives of the intrusion.

A report this week by two U.S. security agencies said the Vermont hackers, who could have been operating from anywhere in the world, used fraudulent emails to trick recipients into revealing their passwords.

In the waning hours of 2016, Russia had not yet commented on the Vermont code discovery, which followed months of controversy surrounding U.S. intelligence reports that Moscow-backed hackers earlier this year stole internal emails from the Democratic National Committee.

Those documents soon began appearing on the website of the anti-secrecy group WikiLeaks, prompting widespread suspicion that Moscow had collaborated with the group in an attempt to undermine the presidential campaign of Clinton.

Russia denied involvement, and Trump has sought to discredit the hacking evidence since his election victory November 8.

Trump’s decision to meet with intelligence officials came as Obama announced a series of economic sanctions against Russia and the expulsion of 35 Russian diplomats and other officials from the United States.

Moscow had been expected to take a similar action against U.S. personnel in Russia, but Putin said there would be no immediate response to the U.S. expulsions — a move widely interpreted as evidence that the Kremlin hopes to see sanctions lifted after Trump takes office January 20. 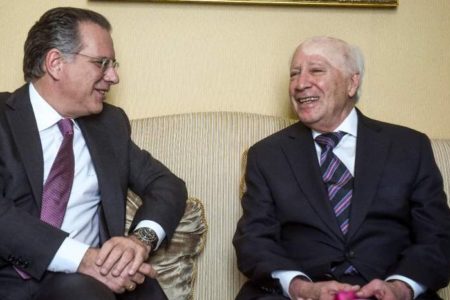