Four Syrian and four Iraqi Yazidi refugees held a cookout with traditional dishes for visitors and other refugees attending the 19th Thessaloniki Documentary Festival on Friday, at a kiosk set up in front of the city’s Film Museum, at the port.

During the event, called “Food Uniting People #With Refugees,” the four men from the refugee camps of Volvi and Alexandria cooked and served quzi, falafel and kibbeh.

Speaking to the Athens-Macedonian News Agency (ANA), 18-year-old Ahmet Obeyid from Syria said he participated because he wanted to show the culinary wealth and culture of his country, but also to thank the Greeks for their friendly attitude towards them.

On the same note, 43-year-old Yazidi Hadir Abbas, father of seven children, said this was an opportunity for him to thank Greeks.

The cookout was organized by the UN Refugee Agency and the Festival’s organizers. 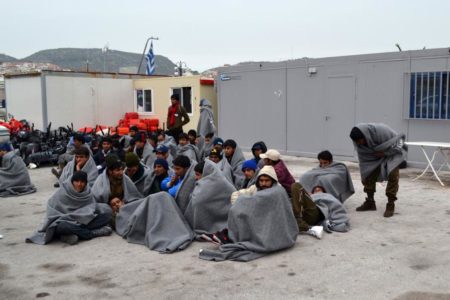