This article titled “Netherlands ‘will pay the price’ for blocking Turkish visit – Erdoğan” was written by Gordon Darroch in The Hague, for The Guardian on Sunday 12th March 2017 19.57 UTC

The Turkish president, Recep Tayyip Erdoğan, has warned the Netherlands it will “pay the price” for a diplomatic stand-off after a Turkish minister was blocked from visiting her country’s consulate in Rotterdam and tensions between the two countries exploded in angry protests.

Erdoğan described the treatment of Fatma Betül Sayan Kaya, minister for families, as shameless and accused the Dutch of “behaving like a banana republic”.

“If you can sacrifice Turkish-Dutch relations for an election on Wednesday, you will pay the price,” Erdogan said in a speech in Istanbul. “I thought nazism was over, but I was wrong. In fact, nazism is alive in the west.”

He called on international organisations to impose sanctions against the Netherlands but did not say if there would be direct repercussions from his country.

The Dutch prime minister, Mark Rutte, who faces a stiff political test in parliamentary elections on Wednesday, said Turkey had crossed a diplomatic line. “This has never happened before, a country saying someone is not welcome and then them coming regardless,” he said, referring to Kaya’s decision to travel to Rotterdam by car after her colleague, the foreign minister, Mevlüt Çavuşoğlu, was banned from flying in to the Netherlands on Saturday.

Branding the move irresponsible and demanding Erdoğan apologise for his references to nazism, Rutte nonetheless said he would continue to seek a diplomatic solution. His words appeared to fall on deaf ears, however. On Sunday night, speaking in the French city of Metz, Çavuşoğlu called the Netherlands the “capital of fascism”.

The Turkish government’s attitude was bizarre, said Rutte. “We’ve ended up in a bad movie: the Turks have ramped this up themselves,” he added.

The Turkish ministers wanted to address a gathering of Dutch Turks, many of whom have dual nationality, before next month’s referendum on a new law to increase Erdoğan’s presidential powers. The Netherlands opposed the visit because it was too close to the parliamentary election, but the lingering row now threatens to overshadow the rest of the domestic campaign.

The far-right leader Geert Wilders, whose Freedom party is projected to win between 20 and 25 seats and could become the main opposition group in the Netherlands, reacted to the images of Turkish flags being flown on the streets of Rotterdam. Wilders, who is campaigning on a platform of “de-Islamising” the Netherlands, said on Twitter: “The Netherlands can see that these people are Turks, not Dutch. They have Dutch passports, but they don’t belong here.”

The dispute between the Dutch and Turkish governments follows tensions between Berlin and Ankara last week over similar visits mooted by Turkish ministers to rally Germany-based Turks. Çavuşoğlu was banned from speaking in Hamburg, prompting Erdoğan to compare Germany’s government with that of the Nazi era.

On Sunday the row spread further as the prime minister of another Nato ally, Lars Løkke Rasmussen of Denmark, postponed a visit scheduled for next weekend by the Turkish prime minister, Binali Yıldırım. “With the current Turkish attacks on Holland the meeting can not be seen separated from that. I have therefore proposed to my Turkish colleague that the meeting will be postponed,” Rasmussen said in a statement.

Back in the Netherlands the Dutch prime minister said he had made eight telephone calls to Yıldırım during the course of the evening and would be seeking a face-to-face meeting as soon as possible.

“We asked this Turkish minister not to come because of the tensions we expected in Rotterdam and because we were uncomfortable with the visit in general,” he told Dutch television.

The row escalated swiftly on Saturday after the Dutch government withdrew permission for Çavuşoğlu’s plane to land. Bert Koenders, the Dutch foreign minister, said talks between the two governments had broken down when Çavuşoğlu said on television that Turkey would respond to the ban with sanctions.

In a statement, the Dutch government said: “The search for a reasonable solution proved to be impossible. The verbal aggression by the Turkish authorities that followed today [Saturday] is unacceptable.”

Having travelled to Rotterdam, Kaya was stopped by police outside the consulate’s door and she spent four hours sitting in her car while a crowd of several thousand gathered, waving Turkish flags and chanting slogans. Many came out on to the streets after watching live coverage on Turkish news channels. 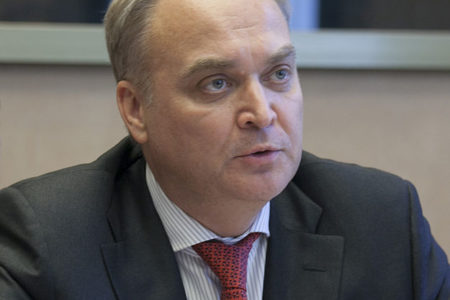 Putin names new ambassador to US