BRUSSELS (ANA/Ch.Vassilaki) – What it seems strange regarding the IMF stance is that it is asking the main opposition (New Democracy) to give reaassurances on its positions after 2019, that is the period the term of the current government ends, French Finance Minister Michel Sapin on Tuesday said in a press conference held on the sidelines of the ECOFIN.

The French minister called on the IMF to assume its responsibilities regarding the Greek programme as any delays may have a great impact on Greece. Sapin explained that he has never considered the IMF participation to the Greek programme necessary. However, he said that a solution with the IMF must be found.

He also said that the persistence of the IMF on labour issues is an obsession and this does not only apply to Greece but other countries too. “The same also applies for the fiscal system and mainly the pensions,” he said.

“We have to be politically sensible,” he underlined.

Asked on further debt relief demanded by the IMF, he replied that the first priority is the conclusion of the programme review in order to ensure the recovery and the investments. Then the fiscal targets for the period after 2018 and the debt will be set.

Finally, he said that the 3.5 percent primary surplus target for a decade is “not serious.”

Dragasakis: The government’s exclusive target is to exit the system of surveillance 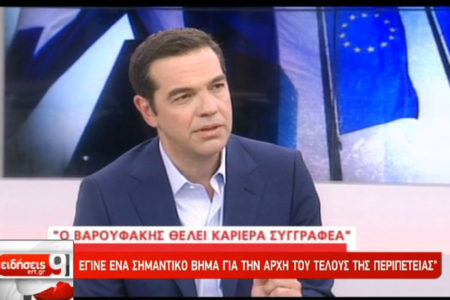