“Konstantinos Mitsotakis died today at 01:00 am, surrounded by the persons he loved and who loved him”, said his family in an announcement.

Born in Chania, Crete, on October 18, 1918, Mitsotakis was the nephew of liberal statesman Eleftherios Venizelos and was first elected to Parliament as a member of that party in 1946. He served in several cabinet posts, including finance minister. In 1961, he was elected deputy with the party of George Papandreou, Center Union. In 1965, he led a group of dissidents who abandoned George Papandreou’s liberal Center Union government following a clash over control of the armed forces.

Mitsotakis was arrested along with other politicians at the start of the seven-year dictatorship, and he later lived in exile in Paris until shortly before the junta collapsed in 1974.

In 1977, he re-entered the Parliament at the head of the small neoliberal party and a year later he joined the governing New Democracy party, serving first as finance minister and later as foreign minister. He became the party’s leader in 1984.

Mitsotakis became prime minister in April 1990. Mitsotakis’ government was brought down by a group of conservative dissenters in 1993. On October 26, he resigned from party leader and became honorary president of New Democracy.

He retired from active politics in 2004 but remained honorary chairman of New Democracy party.

Archbishop Ieronymos: ‘I see Europe of exploitation, not solidarity’ 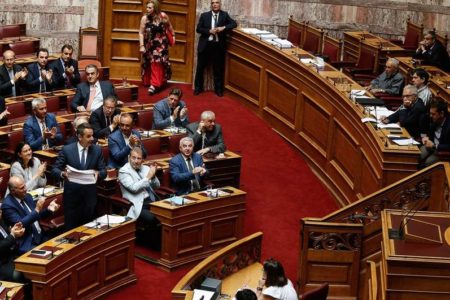