This article titled “Athens: thousands of public-sector workers march against austerity” was written by Angela Monaghan, for The Guardian on Thursday 22nd June 2017 18.41 UTC

Greece has been hit by fresh strike action as thousands of public sector workers marched through Athens in protest against the debt-ridden country’s austerity programme.

Authorities said that about 5,000 people took part in the demonstration on Thursday, in the latest in a series of protests that have hindered rubbish collection in major cities.

Unions are calling on the left-led government to grant workers better employment rights, moving those on short-term contracts that have expired or are about to expire into full-time, permanent roles.

Some demonstrators dumped rubbish outside the interior ministry building, and protestors briefly clashed with police who used teargas to prevent them from entering the parliament complex.

A government attempt to extend the contracts of municipal refuse collectors has been ruled unconstitutional, and government officials have said they are seeking an alternative solution.

As the dispute continues, authorities in Athens and other major cities have asked people to keep their refuse at home.

Greece has been forced by its lenders to agree to further spending cuts, pension reductions and tax rises in order to unlock emergency funds. Last week a fresh crisis was averted when creditors agreed to release €8.5bn (£7.4bn) of bailout funds aimed at putting the debt-stricken nation back on the road to recovery.

Greece will initially receive about €7.4bn, enabling the government to repay debts mainly owed to the European Central Bank. The remaining funds will be handed over once creditors are satisfied that Greece has complied with reforms. 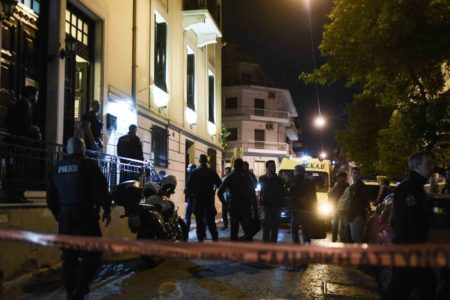