The room in Istanbul’s main court house was packed as the trial of17 journalists working for Cumhuriyet newspaper got underway. The trial is widely seen as pivotal for the future of press freedom in Turkey with Cumhuriyet one of the last remaining mainstream newspapers critical of the government and president.

The charges have been widely used since the introduction of emergency rule, following last July’s failed coup, that has resulted in more than 50,000 people being jailed.

The 17 journalists on trial include some of the paper’s top executives, leading columnists and even a cartoonist. Speaking in his defense, Cumhuriyet editor in chief Kadri Gursel strongly condemned the charges, claiming prosecutors had broken the law in collecting evidence against him. He strongly refuted the evidence that included unsolicited texts from alleged supporters of exiled cleric Fethullah Gulen.

Ankara blames Gulen, who lives in self imposed exile in the Untied States, and his followers for being behind the coup attempt, in which more than 240 people died. Gursel is accused by the government of supporting Gulen and the Kurdish rebel group the PKK.

Gursel has for decades been one of the most outspoken critics of Gulen, and in the 1990’s was kidnapped and held for several weeks by the PKK.

A key part of the case against the journalists presented in Monday’s hearing was that Cumhuriyet changed its editorial policy, which prosecutors claim is evidence the paper is following Gulen’s agenda.

The change in policy cited by the prosecution included focusing on human rights violations in the ongoing crackdown on the Kurdish rebel group the PKK, and exposing links between President Recep Tayyip and his government, and Gulen before the coup attempt.

“The paper decided to cover human rights abuses during the state of emergency, and even before, abuses committed during military operations against the PKK, and highlighting the responsibility of the government for cooperating with Fethullah Gulen. All these are taboos in Turkish media today,” claims Erol Onderoglu, Turkey’s representative for Reporters Without Borders, the Paris based media freedom group, “Something which is purely editorial has been brought here to the courthouse today as a criminal activity.”

Cumhuriyet CEO Akin Atalay told the court the prosecution case against him and his fellow journalists is, “A complete legal murder.” Atalay accused prosecutors of seeking to either silence the paper or “take it over.”

The Cumhuriyet case has become a focal point for growing concerns about media freedom in Turkey.

Before the start of the case hundreds of journalists, newspapers supporters, and members of parliament from the two main opposition parties marched from the nearby Cumhuriyet office to the Istanbul court house, chanting “rights, justice and you cannot silence the media.”

Erdogan has strongly backed the prosecution of journalists, insisting no one is above the law. He recently claimed the jailed journalists are being prosecuted for terrorism offenses, not for being journalists.

Cumhuriyet, the country’s oldest newspaper founded shortly after the creation of the Turkish Republic, has a long tradition of challenging and scrutinizing power. The case against it is increasingly seen as sending a message to wider Turkish society.

“It will be much more easier to silence all the rest of the small, diverse, media outlets critical of the government, after imposing silence on all these prominent journalists working at Cumhuriyet,” warns Reporters Without Borders Onderoglu. 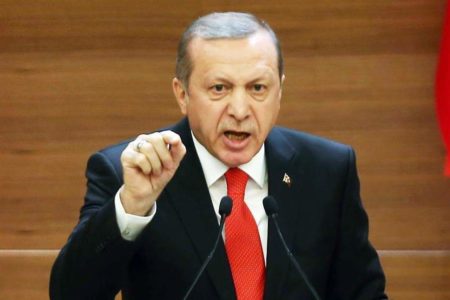