The world’s appreciation of United States leadership has dropped to a new low since Donald Trump became president one year ago, according to a new Gallup poll.

Median admiration of U.S. leadership now stands at 30 percent in 134 countries and regions, lower than it was under the leadership of Trump’s two most recent predecessors, Barack Obama and George W. Bush, the Gallup World Poll found.

Of the 134 countries, approval ratings declined sharply in 65 of them — many of which are U.S. allies and partners.

Approval ratings plummeted 40 points or more, for example, in Canada, Norway, Belgium and Portugal, a sharp reversal from 2016, when majorities in each of these countries approved of U.S. leadership.

In Israel, 67 percent of the country’s citizens approve of U.S. leadership, equal to the ratings the U.S. received during the Bush administration. Gallup’s polling in Israel was conducted prior to Trump’s announcement to officially recognize Jerusalem as Israel’s capital, but he had frequently vowed to do so during his presidential campaign.

The region in which U.S. leadership’s reputation deteriorated most was in the Americas. Approval ratings plunged in every country in the region to a median 24 percent, about half of what it was during Obama’s last year in office.

The U.S. did not fare much better in Europe, where the current rating stands at 25 percent. In Asia, it dropped to 30 percent, matching the previous low during the Bush administration.

The reputation of U.S. leadership shines brightest in Africa, where the rating stands at 51 percent. However, that mark has dipped to its lowest ever level and could decline even more after Trump’s reported derogatory comments about Africa last week.

Gallup said the ratings “may have implications on U.S. influence abroad,” as its polling shows Germany has replaced the U.S. as the world’s top ranked global power with an approval rating of 41 percent.

The poll also found the U.S. is now rated about the same as rival countries China (31 percent) and Russia (27 percent).

Gallup said it would be premature to consider whether Trump’s “America First” foreign policy approach is a success.

The polling and research organization concluded, “It is clear that based on the trajectory of what the world thinks of the U.S., many of the U.S. alliances and partnerships that the Trump administration considers a “great strength” are potentially at risk.

Russia probes come up against claims of executive privilege 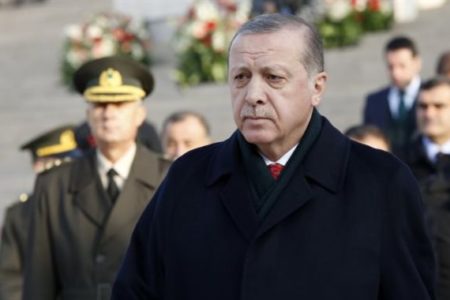