Turkey goes to the polls Sunday, and President Recep Tayyip Erdogan is facing his toughest test in his 16 years in power.

Challenger Muharrem Ince’s platform of breaking down Turkey’s deep political divides, especially between the religious and secular, have seen him reaching out beyond his pro-secular CHP party’s base. An increasingly confident Ince has even begun courting voters in Erdogan’s backyard.

On Saturday, Ince took his campaign to Istanbul’s Uskudar district. Historically religiously conservative, Uskudar is where Erdogan chose to build his private residence overlooking the Bosphorus waterway that divides Istanbul.

Nearby, construction is the final stages on the massive $100 million Camlica mosque built by Erdogan supporters. The mosque has become a potent symbol of the president’s Islamist roots.

With Erdogan portraying himself as the protector of religious rights, Uskudar has traditionally been a stronghold for the president.

But Ince’s arrival in Uskudar was greeted by thousands of supporters, chanting “president Ince.”

“He is challenging Erdogan in front of his home,” said one enthusiastic supporter, adding “it is clearly seen here that Turkey needs Muharrem Ince. No one can stop him.”

Ince’s CHP party has always been viewed with deep suspicion by religious voters because it was created by the founder of the secular state, Mustafa Kemal Ataturk.

The CHP used to strongly back controls on religion, including the banning of Islamic headscarves in universities and courts. Restrictions ended by Erdogan in the face of bitter opposition by the CHP.

But Ince’s campaign is built on turning a page on Turkey’s bitter polarizations. Addressing the packed Uskudar crowd, he repeated a message of freedom and justice for all.

Ince comes from a conservative family and the retired physics teacher regularly prays. On receiving his party’s nomination, he went to a mosque to pray and then visited Ataturk’s mausoleum, a building of symbolic importance to secularists.

Listening to Ince’s Uskudar speech were two sisters, one wearing an Islamic headscarf. Both appeared ready to believe Ince has broken with CHP’s past.

“[The CHP] couldn’t in the past catch the right mood. But with Muharrem Ince, they have,” said the Islamic dressed sister.

“He has a unifying discourse; I mean an integrating attitude. He doesn’t have a divisive discourse,” added the other sister.

“He (Ince) has certainly been able to overcome the traditional handicap of CHP which is to speak exclusively to its political audience,” political analyst Sinan Ulgen of the Istanbul-based Edam research group said.

“He (Ince) has repeatedly said he was at ease with the freedom of religion that he is not the dogmatic secular candidate that CHP had selected in the past. Combined with his background, he comes from a conservative family, that makes him a candidate well liked even by the conservative constituencies,” Ulgen added.

Ince’s campaign has avoided angry polemics with Erdogan, which defined previous challenges by his party. Instead, he is using cutting wit to attack the incumbent president, a strategy that analysts suggest is resonating with the electorate.

“There is just this weariness with Erdogan; Erdogan is just too abrasive, too combative,” political analyst Atilla Yesilada of Global Source Partners said. “I think the nation is tired regardless of the political views, 16 years of constant enemies, which the nation can’t even see. Erdogan constantly threatens, whereas Ince smiles, he tries not to hurt people,” added Yesilada.

But Erdogan still retains strong support in Uskudar like in the rest of the country among his powerful religious base. He repeatedly warns the religious rights they have gained under his rule would be in peril if he should lose.

On Sunday, in a dominant display of support, Erdogan addressed more than a million people for his main Istanbul rally.

One of Erdogan’s defining achievements is the emergence of a large conservative prosperous middle class. But rather than any threat posed by the pro-secular CHP, fears of a looming economic recession, is dominating the presidential election.

Erdogan supporters are traditionally loyal, but analyst Yesilada suggests Ince’s message of hope versus a politics of fear, can still pose a threat to the president.

“I don’t think too many AKP party (Erdogan’s party) voters would switch to CHP. But they feel less threatened by Ince, so they could stay at home to protest [the] AKP, knowing under Ince their rights would not be threatened. We saw this in June (parliamentary) election 2015, AKP lost its majority because AKP voters stayed home and this could happen again,” Yesilada said. 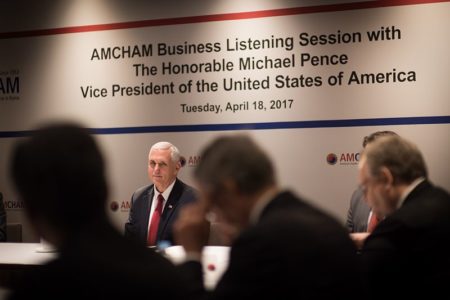