The country is already in election mode and there will be no time for New Democracy to kick back and take a summer break, main opposition New Democracy leader Kyriakos Mitsotakis said on Wednesday in his address to ND’s Political Committee.

There were currently two main threads dominating the news, he noted, one being the government’s inadequacy and the second being its populist attempts to cover this up, which Mitsotakis predicted would intensify as the time for elections drew nearer.

“The painful Prespes Agreement, the fourth memorandum and the tax storm will continue until at least 2022,” Mitsotakis noted, stressing that ND’s job was to expose the fib about the so-called ‘end of the memoranda’ and the way that the government was jeopardising the country’s future.

According to ND’s leader, the Prespes Agreement was already generating unfavourable faits accomplis, with the government in Skopje daily citing the NATO entry given to them by Greece, “thus abandoning the most effective weapon we had at our disposal, which was used by Costas Karamanlis in Bucharest.”

“The longer this government stays in power, the more it harms the country…a government that is ready to hand over everything might hold elections at any time. We must be ready, however; whenever they are held, we will win,” he said. 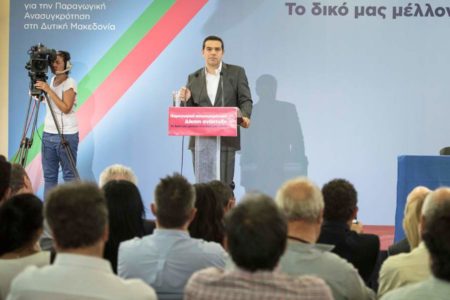