Ankara insists Trump’s unilateral actions do not bind it. The looming dispute threatens to exacerbate existing tensions between the two NATO allies.

“We are going to aggressively enforce our sanctions, and that puts a very important test to those companies, to those banks and to those governments—who do they want to do business with?” said a senior official Monday. “We are very serious to enforce those sanctions, and that’s what the president has directed us to do.”

The first wave of Iranian sanctions goes into effect Tuesday and targets mainly financial transactions and commercial airline sales with Iran. In November, measures to stop the sale of Iranian energy are set to go into effect.

Iranian oil and gas are critical to energy-poor Turkey. In the first six months of this year, Turkey imported an average of 176,000 barrels a day of Iranian oil, accounting for 49 percent of Turkish imports.

“It’s pretty damn serious, obviously, with the Turkish economy facing difficult times. To give up on trade with Iran and not being able to buy gas and oil would really hurt the Turkish economy,” said international relations expert Soli Ozel of Istanbul’s Kadir Has University. “So, there is a big problem, and there is very little time to solve it, and at a time when both sides don’t trust one another.”

With Turkey a significant importer of Iranian oil, analysts say it will be a priority of Washington to persuade Ankara to comply with its sanctions. Last month, senior U.S. officials—led by Marshall Billingslea, assistant secretary of the Treasury for terrorist financing—visited Ankara to meet with government ministers and business leaders to press the case for sanctions.

A Turkish business source claims Washington’s suggestion to use Saudi Arabian oil instead of Iran’s fails to take into account the costly and timely readjustment of Turkish refineries to accommodate the lower quality of Saudi oil.

Ankara also has strategic concerns about relying on Saudi Arabia.

“Turkey is being told to buy oil from Saudi Arabia, while it has a pipeline with neighboring Iran and can get crude at a lower price,” wrote Ilnur Cevik, a senior presidential adviser in Turkey’sSabahnewspaper. “Besides, who can guarantee that Turkey will be provided a steady flow of oil at reasonable prices when Saudi Arabia at times is displaying an antagonistic policy toward Ankara?”

Former U.S. President Barack Obama granted Ankara some exemptions when imposing sanctions against Iran. However, critics point out, Ankara severely undermined U.S. sanctions by using gold to circumvent restrictions on the use of dollars to trade with Iran.

Turkey at one time was one of the world’s biggest gold importers and exporters. Washington has now closed the door to using gold in trade with Tehran.

Earlier this year, a New York court convicted a senior official of Turkish state-controlled Halkbank for a violation of U.S. Iranian sanctions. The U.S. Treasury is considering a hefty fine against the bank, which analysts warn could be several billion dollars.

Analysts see the Halkbank experience as a warning to Ankara and the Turkish financial system of the risks violating future U.S. sanctions.

“It will actually force Ankara to choose between Iran and the United States,” said former senior Turkish diplomat Aydin Selcen, who served in Washington. “Not complying with Iran sanctions is not an option. There will be increased pressure from the U.S. bringing a vicious circle in bilateral relations.”

U.S. Iranian sanctions are set to be the latest in an ever-growing list of disputes between Ankara and Washington.

“You could actually find ways out of all this,” Ozel said. “But trust in these relations has been totally decimated. And to rebuild trust in relations is the main, hard task.” 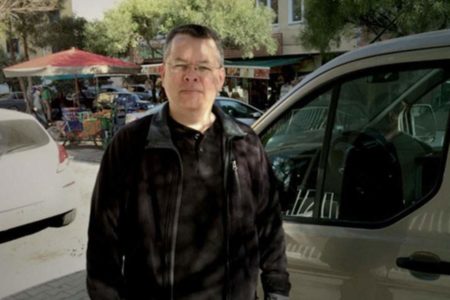