This article titled “Growing backlash over transfer to ‘luxury’ jail for Greek terrorist” was written by Helena Smith in Athens, for The Guardian on Sunday 5th August 2018 16.23 UTC

The Greek government is facing a growing backlash over its decision to move the leader of the disbanded leftist terror group, November 17, from a high-security prison to a “luxury” open-air jail.

Washington and Ankara joined the public outcry condemning the relocation of the hitman, Dimitris Koufodinas, from Korydallos, Athens’ fortress-like penitentiary, to an agricultural facility in central Greece where labour will amount to picking fruit and clearing the countryside.

US State department spokesperson, Heather Nauert, wrote on Twitter that she deplored the decision, expressing fears that in a country with a history of political violence, he could exert his appeal to train a new generation of armed guerrillas. The 60-year-old former beekeeper remains a mythical figure among those on the radical left who still believe in armed resistance.

The tweet said: “We understand convicted Greek terrorist Dimitris Koufodinas was moved to a farm prison with lighter restrictions. He murdered 11, including US personnel, and is inspiring the next generation of terrorists. We condemn in the strongest terms furloughs or any easing of his prison stay.”

Turkey, at odds with Greece over its refusal to extradite eight military officers it also claims are terrorists, said: “This has once again strengthened our doubts about the functioning of the judicial system in Greece. Granting tolerance to a terrorist disrespects the memory of our diplomats who were martyred and their families.”

The “operational leader” of November 17, Koufodinas claimed “political responsibility” for the group, regarded until its unravelling in 2002 as one of the most lethal terror gangs in the west.

From 1975, when it emerged following the collapse of military rule with the killing of the CIA station chief in Athens, to June 2000 when it shot its last victim, the British military attaché in Athens, the group assassinated 23 people. Greek industrialists, businessmen, politicians and publishers were also targeted. Such was its ability to evade capture that long before the appearance of al-Qaida, the Hellenic Marxist-Leninist revolutionaries were at the top of America’s most wanted list.

Koufodinas, who was the chief hit man and was dubbed “Poison Hand” because of his prowess with a gun, received multiple life sentences without parole. He surrendered himself after 65 days on the run – most of it spent in a tent pitched above a nudist beach on the isle of Agistri, a 90-minute ferry ride from Athens. He openly confessed to the crimes and resolutely refused to show any remorse.

Dora Bakoyiannis, Greece’s former foreign minister, whose journalist–cum-politician husband, Pavlos, was gunned down in 1989, voiced incredulity that the government should chose to transfer “the N17 serial killer to a luxury jail” when the nation is still reeling from the failure of authorities to protect citizens from devastating forest fires east of Athens. The death toll from the blazes rose to 92 at the weekend. On Sunday night the chiefs of the fire and police services were replaced as Tsipras’s coalition sought to curtail mounting anger over its handling of the inferno.

The clamour has coincided with criticism of the perceived kid-glove treatment Koufodinas received on prime minister Alexis Tsipras’ watch. Over the past year he has been allowed to take jail leave several times, prompting angry reactions both in Greece and abroad.

The government has rejected accusations of being soft on anti-establishment groups with roots in leftist radicalism and anarchy. It denied the hitman would henceforth “enjoy special treatment” or be able to apply for early release once he has served 19 years in jail.

“The sentence will continue to be served as normal,” said justice minister Stavros Kontonis insisting that convicts were being moved to other facilities as part of plans to turn the vastly overcrowded Korydallos prison into a jail for defendants awaiting trial. “The transfer does not entail special treatment, a reduction of the sentence or partially unrestricted residence.” 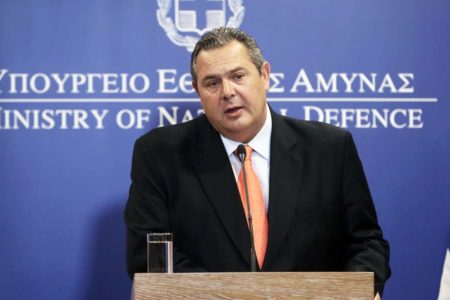