Greece’s parliament began to debate Monday a deal that would normalize Greek relations with FYR Macedonia, a day after violent protests against the accord broke out in Athens.

Parliamentary officials have tentatively scheduled a vote for Thursday on the deal, which calls for FYR Macedonia to change its name and for Greece to drop its objections to the Balkan country joining NATO and the European Union.

The deal was debated Monday in the Greek parliament’s committee on defense and foreign policy, while the house’s plenary session will take up debate Wednesday.

Greeks have been divided over the accord, in which FYR Macedonia will change its name to the Republic of North Macedonia. Greece has long protested the name Macedonia, adopted by its northern neighbor after it split from Yugoslavia. Some Greeks say the new name still represents an attempt to appropriate Greek identity and cultural heritage, because Macedonia is also the name of Greece’s northern province made famous by Alexander the Great’s conquests.

Protests in Athens against the agreement turned violent Sunday, with demonstrators throwing rocks, firebombs and other items at police, who responded with numerous volleys of tear gas. At least 25 officers and dozens of people were injured in the clashes, officials said.

A nationwide poll in Greece this month found that 70 percent of respondents oppose the deal, AP reported.

The agreement has caused Greek Prime Minister Alexis Tsipras to lose his four-year coalition in parliament after his nationalist allies defected to protest the deal. Following the upheaval, Tsipras narrowly won a confidence vote in parliament Wednesday.

The Greek prime minister and his FYR Macedonian counterpart, Zoran Zaev, brokered the compromise in June to end the 27-year name dispute between the two neighbors.

Last week, Macedonia’s parliament approved a constitutional revision to change the country’s name. The agreement has also caused protests in FYR Macedonia, with critics there saying the government gave up too much in the deal. 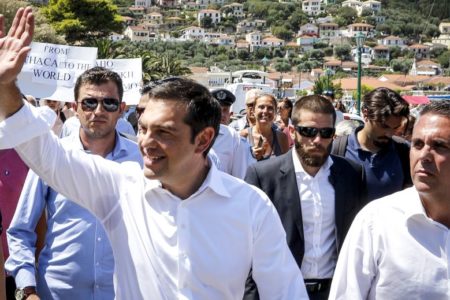