Panathinaikos striker Djibril Cisse said he has been racially abused by fans this season, and will leave the Greek club.

I’m a sports fan, ardently support several teams in more than one country across different kind of sport domains. For the most part, it’s fun, even when my team loses, because I enjoy the game. Supporting a team is not being a fanatic whose identity and respect depends on the fortune of a sports team. I don’t hate other teams, even when I want them to lose, and lose badly—especially when they play my team.

In addition to appreciating the complexities and intrinsic values of a sport what keeps me coming back is the sense that the game isn’t fixed but there’s fair competition. This doesn’t mean that the referring is void of mistakes; it simply means the system is non-preferential to particular team or individuals within the sport. The integrity is very important.

I believe the integrity and overall appreciation is a vital necessity of any institution that exists in a competitive “market.” Dictatorships and intolerant societies maintain corrupt and unpopular institutions, but modern societies operate by consensus and, yes, by value-service relationship.

Even non-football fans, are now aware what happened at the Olympiakos – Panathinaikos game the other day. The refs made many serious mistakes that, I think, took the victory from PAO and gave it to OSFP. In addition, the conditions before, during, and after the match exhibited, once again, the terrible conditions that make the Greek football league an ugly and very visible sore on the face of this modern country.

Why all this violence? Why is it allowed to persist? Why so many decisions—on and off the field—are suspect? Why are participants (many in high positions) allowed to trash the game and promote violence? This awful picture can’t possibly be the work of the few who act against the law and the mores of a civilized society. It’s a systemic problem all around.

Unless we accept that most of the Greek institutions have been taken over by the “bad elements” and the rest of the people are powerless to do anything about this situation. Why is it that most institutions lack respect in Greece today? From the sports, to the state agencies, the church, the media, etc, there’s a general sense of malaise. Distrust, inefficiency, corruption, and no respect prevail everywhere.

This simple act of respecting others can go a long way into making good change. Respect reduces violence, makes for a cleaner environment, creates a more polite society, allows for reasonable dialogue, facilitates tolerance, and elevates the relationship of state-citizens.

I’m a realist and I know systemic problems aren’t solved overnight, however, everyone can help much if he/she starts with little acts of respect. I can’t believe that a self-respecting society whereas the “crazies” and the extremists are shunned can hold such society hostage.

Those elements will be marginalized. Elevating the public discourse, taking care of our public square makes for a happier life. 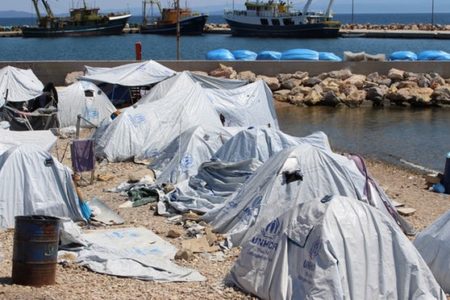